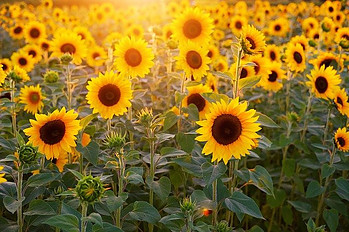 One thing that I love doing is expanding my palate with different healthy foods and recipes. That’s why I was so excited to stumble across the Jerusalem artichoke! Often called “sunchokes,” Jerusalem artichokes actually belong to the sunflower family and are native to North America. These roots are quite versatile in recipes and can even function as great substitutes for some of the foods that we eat everyday. But if that’s not enough to get you thinking about trying the Jerusalem artichoke, here are a couple more fun facts about sunchokes!

As an Amazon Associate I earn from qualifying purchases. When you use the links on this page to make a purchase I may get a small commission and you may get a great bargain. It’s a win-win all around. Support my page and I can continue to provide great tips, recipes, reviews and lifestyle advice. Ask me how by clicking here!

When you hear the name “Jerusalem Artichoke” for the first time, you naturally assume that it belongs to the artichoke family and is probably grown in Jerusalem. But that’s actually not the case for this particular food. In fact, the Jerusalem artichoke isn’t an artichoke at all! As I mentioned before, they are often called sunchokes due to their relation to the sunflower family. Jerusalem artichokes are a kind of tuber root that shares a similar appearance to that of a ginger root. Depending on how they are served, their taste and texture differs considerably. 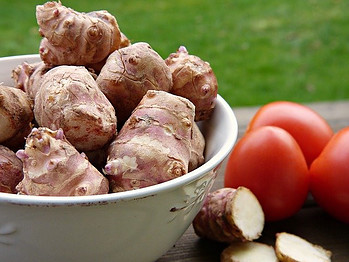 These roots can be sliced or even grated and served raw, steamed, or boiled. When eaten raw, their taste profile is similar to water chestnuts. They are best described as having a sweet and nutty taste and a texture similar to that of jicama when added raw to salads. Otherwise, Jerusalem artichokes are often compared to potatoes. This is a result of the texture they achieve when cooked. As for the way they taste when cooked, Jerusalem artichokes can also be likened to celery, broccoli, and other artichokes. Although many people remove the skin for consumption, it is, in fact, edible as well! The skin adds a powerful earthy flavor to the root that people either love or hate depending on preference.

How Do You Eat Jerusalem Artichokes?

So, how would someone eat a Jerusalem artichoke? Well, as I mentioned earlier, Jerusalem artichokes are very versatile in the way that they can be prepared. Much like potatoes, they can be fried, steamed, boiled, mashed, grilled, or even roasted! Not to mention they can also be eaten raw. Typically, eating this food raw involves thinly slicing and sprinkling it over a salad for an extra crunch. Steaming and boiling them is a quick and easy process that softens them considerably for eating or mashing. Because of their taste and texture, Jerusalem artichokes also work well as or mixed into a soup. Furthermore, while they are great grilled and/or roasted, they can also be sliced and fried into chips making them a great substitute.

Another method of eating Jerusalem artichokes is by trying them mixed into the new superfood organic powder from Yoursuper. This particular powder is Gut Feeling from Yoursuper and is made specifically to improve gut health. Along with Jerusalem artichoke, this blend consists of celery, apple, lemon, lemon balm, and ginger giving it digestive enzymes and 20% of your daily fiber. Taking Gut Feeling is as simple as stirring a teaspoon of powder into a glass of water, and just like that you are giving your body the tools to support healthy digestion and even to increase your metabolism!

Are Jerusalem Artichokes Good For You?

I believe that the best way to give your body the nutrients that it needs is through natural and healthy foods. This is one of the reasons why I was so excited to discover the Jerusalem artichoke! These roots are a good source of iron (about 30% of the daily requirement), potassium and vitamin B1. Along with giving you plenty of energy, such nutrients help to support your muscles and nerves as well. Additionally, Jerusalem artichokes can be consumed as a source of vitamin C and minerals such as magnesium and phosphorus.

Typically, Jerusalem artichokes are known for also containing a considerable amount of inulin. Inulin is a prebiotic fiber that is generally associated with gut health. The yoursuper Gut Feeling Powder enhances these natural properties even more to reduce uncomfortable sensations such as bloating, constipation, and gas. The powder is fully gluten, soy, and dairy free as well as being vegan friendly. You can find Gut Feeling in an individual mix or a bundle here.

While inulin can be great for your health, I do think it’s important to offer a word of caution. When it comes to enjoying Jerusalem artichoke, a little really does go a long way. Too much inulin in a single sitting can result in an adverse reaction that actually causes gas and bloating. These symptoms are typically caused from eating the artichoke raw and varies from person to person. When trying Jerusalem artichokes for the first time, one should eat only small servings at a time, especially if they do not regularly have a diet that is high in fiber.

In addition to supporting the growth of healthy gut bacteria, eating Jerusalem artichokes provides the body with a world of other health benefits as well! Not only is inulin great for your gut, but it can also be great for your blood glucose. Research suggests that inulin has potential to help lower fasting blood sugar and insulin, making it beneficial for those with type 2 diabetes. The potassium that they offer also aids in the regulation of blood pressure, thus combating the negative effects that sodium can have within the body. The Jerusalem artichoke has also been said to have the ability to help lower cholesterol too. The root contains soluble fiber that is able to bind the cholesterol in the small intestine. As a result, Jerusalem artichoke may be able to significantly lower bad LDL cholesterol resulting in better heart health.

Where to Buy Jerusalem Artichokes

6 thoughts on “What is a Jerusalem Artichoke?”